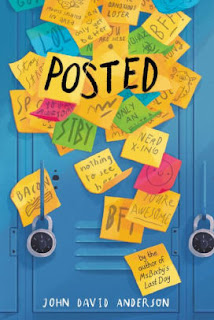 First Sentence: I push my way through the buzzing mob and freeze, heart-struck, dizzy.

Summary: [From BN] In middle school, words aren’t just words. They can be weapons. They can be gifts. The right words can win you friends or make you enemies. They can come back to haunt you. Sometimes they can change things forever. When cell phones are banned at Branton Middle School, Frost and his friends Deedee, Wolf, and Bench come up with a new way to communicate: leaving sticky notes for each other all around the school. It catches on, and soon all the kids in school are leaving notes—though for every kind and friendly one, there is a cutting and cruel one as well. In the middle of this, a new girl named Rose arrives at school and sits at Frost’s lunch table. Rose is not like anyone else at Branton Middle School, and it’s clear that the close circle of friends Frost has made for himself won’t easily hold another. As the sticky-note war escalates, and the pressure to choose sides mounts, Frost soon realizes that after this year, nothing will ever be the same.

Thoughts: I picked up this book because I liked the idea of a story that focused on kids turning to notes when their phones are taken away. Turns out, that was just the underlying thread of the plot. This book is more about acceptance and bullying and what it means to find your tribe. It also touches on what happens when those tribes, inevitably, evolve.

Anderson does a wonderful job of creating a middle school environment. It smacks of all the drama, questions, and friendships that come with that age. I'd be lying if I didn't say this book sent me on a couple of trips down memory land - the good and the bad.

In addition to getting the environment right, Anderson has created a believable cast of characters. Middle school kids, even the good ones, are not particularly nice to one another. This book shows how the bullying that occurs via text message and online still exists when phones are banned. Painful words and sentiment hurt no matter where they are written. But the book also has an uplifting message. Everyone can find their group and, sure, they may have a tough time with change, but most kids, in the end, will do the right thing.

On the whole, I liked the message and plot of this book but the writing felt a bit forced. I got a sense that the author wanted his characters to show off for him. It doesn't ruin the story, but it was a vibe I got at different points throughout the text. Then again, middle school kids do like to show off when they think they're awesome.