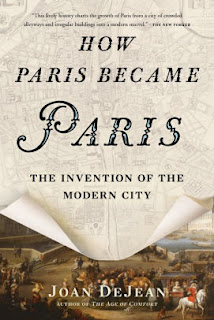 Summary: [From BN] At the beginning of the seventeenth century, Paris was known for isolated monuments but had not yet put its brand on urban space. Like other European cities, it was still emerging from its medieval past. But in a mere century Paris would be transformed into the modern and mythic city we know today. Though most people associate the signature characteristics of Paris with the public works of the nineteenth century, Joan DeJean demonstrates that the Parisian model for urban space was in fact invented two centuries earlier, when the first complete design for the French capital was drawn up and implemented. As a result, Paris saw many changes. It became the first city to tear down its fortifications, inviting people in rather than keeping them out. Parisian urban planning showcased new kinds of streets, including the original boulevard, as well as public parks and the earliest sidewalks and bridges without houses. Venues opened for urban entertainment of all kinds, from opera and ballet to a pastime invented in Paris, recreational shopping. Parisians enjoyed the earliest public transportation and street lighting, and Paris became Europe's first great walking city. A century of planned development made Paris both beautiful and exciting. It gave people reasons to be out in public as never before and as nowhere else. And it gave Paris its modern identity as a place that people dreamed of seeing. By 1700, Paris had become the capital that would revolutionize our conception of the city and of urban life.

Thoughts: When I think of reading a book about the history of Paris, I assume I am in for a long slog of a read. An interesting read, but a slog of a read. That was not the case with DeJean's book. The text is lively and packed with interesting information the moves along at a surprisingly quick clip. While this book does not provide a comprehensive history of the city, it gives the highlights that best illustrate how this old town became a modern city.

Each chapter of DeJean's book is devoted to a different aspect of Paris' history and urban evolution. She covers everything from shopping, street lights, bridges, and public transportation. The chapter discusses the role that characteristic played in developing Paris as a city and the influence such change had elsewhere. DeJean covers how each part influenced city as place, city as a population, and city as cultural and revolutionary history. She offers fascinating insights into design decisions, revolutionary activity, and art and architecture. As the book progresses, it's easy to understand how individual decisions of architecture and innovation came to influence the city as we know it today.

This is a well-rounded text that deeply explores Paris as an evolving urban center. DeJean's text is rich in description and stories that reads easily while showcasing the important role Paris plays in creating the modern city.